Incense (from the Latin incendere i.e. ‘to burn’) is a substance (or a blend of them) that, through its sublimation by fire, creates a distinctive smell. There are myriads of ways to burn incense, myriads of combinations, and also myriads of purposes to make use of it. But today we are focusing on its underlying process of creation, taking as an example the crafting of the Meditation Incense which you will find available in the shop.

Incense is greatly misunderstood in the mainstream areas of Magic and Witchcraft. We normally use incenses to satisfy the practitioner: its aroma being always pleasant, benign, comfortable, chemically perfumed, and -boringly- mild. This is evidently a total deviation of the primary purposes of incense, which is intended to act as an offering to please the spirits, as a medium to connect with them, or as part of a ritual to intoxicate the attendants.

In first place, the art pleasing, calming, or waking Spirits must be endured with caution and attention. Before trying to access them with incense, one should find out what elements are of their liking, and to do so, one should avoid trusting what a manual or correspondence chart says, but try to find it on your own. How? Trying. Of course, that implies the practitioner will have created a medium/long-term bond with spirit, but wasn’t it the point of worshipping a deity/spirit etc. anyway? When offering incense to a Spirit/deity, the crafting process will also be conceived as a ritual, honoring the materials and substances you are employing and explaining them what purpose they are required to work with, for, remember: they are also spirits, and shall be treated accordingly. Thus, conceiving the incense as an offering is actually the conclusion of a process of devotion more than a step towards that same goal.

Similarly, when using incense as a method that directly affects the practitioner, either to connect with spirits, or to aid the practitioner or attendant to a ritual, we will also be honoring a series of spirits or deities: explicitly those who inhabit in the plants and substances employed. Incense is able to sublimate a series of substances that, when enhanced by fire, numb our brain or affect the spirit. It is known that a series of poisons act better when burnt and its smoke is inhaled, and this can be understood as the interaction between the power of fire, the power of air, and the power of the Substance which is being burnt.

Nowadays, the usage of incense is becoming dangerously close to the way we use air freshener. It is widely claimed that burning a series of substances, for instance palo santo, copal, rosemary, sage, etc. is a good way of cleansing a space or a person. But no space or individual can be cleaned if there hasn’t been a previous knowledge of the plant that is being employed (by the practitioner, at least), or if there hasn’t been an agreement between the herbalist and the plant. Taking a plant because it is said that it helps cleansing implies that all previous contact, reflection and knowledge is being taken for granted. Burning Spirits is very likely to call upon them (not repel them), to awake what lies dormant, or they may even take it as an offering. By the way, in order to cleanse anything, the best method implies using purging/bitter substances, such as rue, as they repel the noxious energies that may have established there. The classical recipe for cleansing spaces and individuals is, thus, Rue Water. 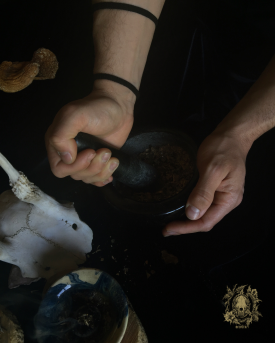 Some of the most valuable incense blends of ancient times included materials that would nowadays be considered fetid, revolting, or even toxic: animal parts, bodily fluids, stinking plants, etc. But we should understand that incenses we not meant to please human sense of smell, but they were meant to call upon or take the practitioners to the realm of Spirits, and so, the substances included were the most fitting offerings, or else the substances whose effects were most sought after.

Nowadays, in this hygienic, aseptic, hyper-healthy world we are living in, a foul smell seems to be indicative of dirt, disease, and death. But there was a time when exotic smells and unexpected aromas were the territory of the sacred and powerful. And so, when crafting an incense, we must keep an open mind about the components that will be employed, and how their union may increase or diminish the power of each other. We must let ourselves be called by the feelings, memories, thoughts that rise spontaneously in our minds.

Now, one could think that an incense recipe is always exactly the same, but again, every single batch of incense will depend on the substances and how they wish to interact, it will depend on the practitioner and his/her situation, and it will also depend on the time of the day it is crafted. But all these factors contribute to the power and uniqueness of incense, and they should even be honored and regarded as sacred.

In order to craft this incense, we have tried several recipes before finding the most suitable one. This incense, contrary to what it may seem, is not solely intended to help the practitioner, but to appease the spirits that surround him/her in order to create the right environment for meditation, dreaming, and introspective works. Evidently, the spirits that interact in this incense also create a sense of lightness, calm, and peace which the practitioner may find appropriate in those moments, but bear in mind that introspection and meditation are not possible if Spirits are not pleased with us and help create an adequate environment for such matter.

The Spirits that agreed to be part of the Meditation incense blend are:

As you may have perceived, this blend is deeply connected to the flora we can find in Northern Europe. This is not unintentional, as we have taken inspiration from Siberian shamanic cultures and approach to spirituality to craft this mixture. You will find the finished incense at the Store.

Some people have asked whether we charge incenses ritually, etc. The thing is, the whole process of making incense, from the very first tests to the final result is to be conceived as a ritual, and so the ingredients are honored and conceived as attendants to the ceremony. Charging a tool or a substance implies conferring it with the powers of the deities/spirits/practitioner that we please, but in Occvlta we consider the real task is to AWAKE the spirits that lie dormant in each of our compositions, and so they can act in a fruitful synergy. There is no need to charge anything if the process has been carried out adequately from the very start.

The Process of Crafting an Incense: Meditation Incense by Júlia Carreras – Semproniana Tort is licensed under a Creative Commons Attribution-NonCommercial-NoDerivatives 4.0 International License.
Based on a work at https://occvlta.wordpress.com/2017/03/27/siberian-meditation-incense/.
Permissions beyond the scope of this license may be available at https://occvlta.wordpress.com/2017/03/27/siberian-meditation-incense/.

One thought on “The Process of Crafting an Incense: Meditation Incense”